Despite being a commercial and increasingly de-politicised event for years, this year's Brighton Pride was run privately after the Pride South East charity faced mounting debts. Last year the event was ticketed with a security firm keeping people out of Preston Park. This was the latest stop on the route towards a completely non-political and commercial Pride event in Brighton.
This year a 'Queers Against the Cuts' bloc was arranged, well in advance, by Brighton and Hove Socialist Party member Beth Granter (her personal statement can be found here and is quoted from below). The aim was to include political slogans specifically highlighting the impact of the cuts in Britain and the need for a mass campaign against the cuts.

As the parade was setting off, a Pride steward told the bloc to move to the back, despite being scheduled to march behind the National Union of Teachers. This was resolved until minutes later another steward aggressively ordered them to leave if they did not move to the back, asking the police to kick them off the parade.

"Another Pride Organiser came and said we had to move back, and when we asked why, became very aggessive and threatened if we didn’t move we would get thrown off the parade. I asked him to check with the previous organisers who had said we could stay.

"Then a police officer came with the final Pride Organiser and said we had all been thrown off the march and had to be removed. At this point I broke down in tears as I had put so much hard work into organising the group."

The bloc was allowed to march at the back after refusing to leave and the intervention of surrounding marchers including Caroline Lucas MP.

"About 100 yards into the march on Marine Parade, some latecomers to our group arrived, including a breast-feeding woman with her baby and others with children. I was told by the Pride Organiser that if I didn’t make them leave our whole group would be blocked. I explained I couldn’t force people to go anywhere. Suddenly a row of police on horseback and foot ran into the middle of our group, and I was told I had to personally identify who was officially in the group to be let through. As this was mainly organised online I didn’t know everybody’s faces. I managed to get most people out of the kettle but around 15 people were left behind."


Those who remained on the parade faced the aggressive actions of Pride stewards and the police. Amazingly they tried to justify this saying that the bloc had become too large and 'could disrupt the march', despite being between 20 and 30 strong, and being at the back of the parade! Four police horses and a police kettle surrounded the bloc for the whole event. 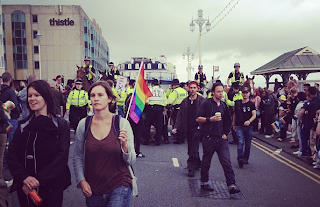 
"I’m very hurt and upset at how I was treated and spoken to by Pride, how the rest of the group were treated, how we were given no reason for our sudden relegation to the back, and our mistreatment by the police. Being surrounded by police on horses and on foot was unnecessary and too heavy handed.

"I believe the only reason we were treated this way is because we had political banners which challenged the status quo of a corporate sponsorship of Pride, and it has really shown the lack of political solidarity from Pride Organisers."


Pride not Profit – Reclaim the Parade!
Pride needs to be reclaimed and reconnect with its radical working class roots. Its origins are in the New York Stonewall revolt against police repression in 1969. This year in Brighton the police were relied on to kick anti-cuts campaigners off the Pride parade. No other reason seems to have motivated this attitude towards anti-cuts activists than the fact we were displaying political slogans, including 'pride not profit', 'cut rents not benefits' and 'queers against the cuts'.
The impact of cuts in public services will affect LGBTQ people and communities especially hard. Raising the age for single room housing benefit, cuts and privatisation of the NHS, cuts in the public sector (with the best records in equalities policies), cuts to LGBT and youth services, and attacks on employment rights all stand to turn back the clock. 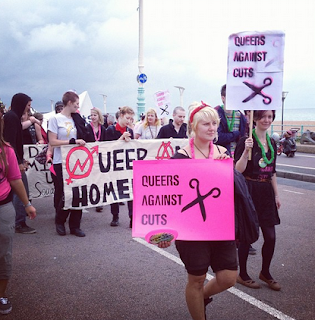 While significant legal advances have been made against discrimination, prejudice cannot be legislated away. More and more people are concluding that liberation has not been achieved, and that a mass movement is necessary to defend and extend the rights and services that have been won. Alongside the rest of the workers’ movement, the campaign needs to be waged against austerity and the phenomenal profits being accumulated by the super-rich at our expense.
Events at Brighton Pride this year are the result of the continued watering-down of the Pride celebration to little more than a billboard for big business, with organisers and police ensuring that even organised participation by anti-cuts campaigners, Socialists etc. faced intimidation, harassment and exclusion.
The Future of Pride
The future of Pride in London is also under threat of becoming a fully private event due to the charity's debts. Pride should not have to rely on big business advertising budgets or the goodwill of London Mayor Boris Johnson. It should be a protest organised by LGBTQ activists. Prejudice has not been beaten and austerity will hit LGBTQ people especially hard.
If Brighton Pride will not allow the space to defend LGBTQ rights and campaign for liberation then we must organise with trade union branches, anti-cuts campaigners, LGBTQ activists and others to build an alternative, politicised Brighton Pride. It will be a celebration, but a celebration aiming at campaigning for LGBTQ liberation, against cuts and privatisation, and highlighting the particular impact these cuts are having on LGBTQ people and communities.

The Socialist Party fights for a democratic socialist society where the present rule of big business and profit is ended and people's needs come first.

We are affliated to the Committee for a Workers' International (CWI) which is organised in more than 40 countries helping to unite working class and oppressed peoples against global capitalism. We help organise campaigns in workplaces, trade unions, schools, universities and communities. We fight against privatisations, cuts, fees, job losses, repossessions, war and attacks on homes, pensions and the NHS.

The Socialist Party branch in Brighton and Hove has a proud history of fighting for the city's working class, particularly our members and city councillors from Militant who led the victorious anti-Poll Tax movement of the late 80s and early 90s that brought down the Thatcher government.

In the past few years we have helped to secure Brighton's council homes for future generations against privatisation, campaigned to defend jobs and homes caused by the capitalist recession, fought against post office and nursery closures, supported working people taking action to defend their pay, pensions and conditions from attack, led protests against job losses, public service cuts and the privatisation and the dismantling of the NHS, and fought against academy plans to privatise the running of our schools. We have been key to the Brighton Stop the Cuts Coalition, and helped initiate and build the youth movement against fees and EMA cuts in Brighton at the end of 2010.
You can see a video we produced locally explaining some of our main ideas here: www.youtube.com/watch?v=sKTTxsjPBnA.
For information about our campaigns, our aims and our programme visit our national site by clicking the logo above or come along to one of our activities and get involved.
To get in touch:
EMAIL: info.bhsp@gmail.com
We receive a lot of views from people internationally. If you are interested in the work of the CWI in your country you can search this website: www.socialistworld.net
Listed below are the websites for the top 5 viewing countries of our website:
USA: www.socialistalternative.org
Russia: www.socialistworld.ru
Germany: www.sozialismus.info
France: www.gr-socialisme.org
Republic of Ireland: www.socialistparty.net

A Strategy to Defeat the Cuts

Socialism in the 21st Century

Women and the Struggle for Socialism

The Environment and Socialism