Response to Pride Organisers and Police

At Brighton Pride an anti-cuts 'Queers Against the Cuts' bloc registered to march in the parade but was sent to the back by Pride organisers and Police. Participants were subjected to kettling and intimidation throughout the parade. See reports here and here. Peter Tatchell said,

"Throughout the march they were kettled by police on foot and horseback, and subjected to repeated intimidation. The group was peaceful and orderly. There was no justification for the way they were mistreated. No other political contingent was abused in this way. It marred what was otherwise a great parade.

"Participating groups should not be subjected to political vetting or censorship. I hope this was just a case of over-zealous, maverick stewarding and policing and not officially sanctioned by the Brighton Pride organisers."


Pride organisers have commented in G-Scene that the Queers Against the Cuts bloc was asked to move to the back of Pride because of concerns raised by the Police:

“It transpired that the group gave an open invite for people join them and Sussex Police raised some concerns about this. We were advised by Sussex Police to move them to the back of the parade, when stewards attempted to facilitate this the group declined to move at all.”

However the bloc organisers were always clear that individuals could join if they agreed with its message. The Labour Party, Tories and Liberal Democrats all extended open invites to members of the public to join their section of the parade; why were they not sent to the back? When the police called Beth, the main organiser, to introduce themselves prior to the parade they expressed no concerns about the bloc. 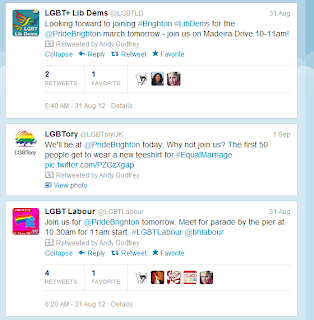 Chief Supt Graham Bartlett comments were also misleading, as they argue the use of horses and officers at the back of the parade was totally innocent:

“Police officers have always walked at the back in order to distinguish the parade from the rest of the public and to safely manage the parade through the streets to its destination in Preston Park, and to make sure there is a safe distance between the horses and members of the public.”

This says nothing about the Police kettling half the bloc, and nothing of why the bloc was relegated to the back in the first place, presumably for the reasons described by the organisers. More importantly, it doesn't at the very least acknowledge the intimidation felt by participants who were surrounded by police and four horses throughout the parade!

The main point needs to be repeated: Pride needs to reconnect with its campaigning roots at a time of significant attacks on the rights and services of LGBTQ people and communities. The impact of cuts in public services will affect LGBTQ people and communities especially hard. Raising the age for single room housing benefit, cuts and privatisation of the NHS, cuts in the public sector (with the best records in equalities policies), cuts to LGBT and youth services, and attacks on employment rights all stand to turn back the clock.

While significant legal advances have been made against discrimination, prejudice cannot be legislated away. More and more people are concluding that liberation has not been achieved, and that a mass movement is necessary to defend and extend the rights and services that have been won. Alongside the rest of the workers’ movement, the campaign needs to be waged against austerity and the phenomenal profits being accumulated by the super-rich at our expense.

Events at Brighton Pride this year are the result of the continued watering-down of the Pride celebration to little more than a billboard for big business, with organisers and police ensuring that even organised participation by anti-cuts campaigners, Socialists etc. faced intimidation, harassment and exclusion.
Posted by South East Socialist Party at 15:39

The Socialist Party fights for a democratic socialist society where the present rule of big business and profit is ended and people's needs come first.

We are affliated to the Committee for a Workers' International (CWI) which is organised in more than 40 countries helping to unite working class and oppressed peoples against global capitalism. We help organise campaigns in workplaces, trade unions, schools, universities and communities. We fight against privatisations, cuts, fees, job losses, repossessions, war and attacks on homes, pensions and the NHS.

The Socialist Party branch in Brighton and Hove has a proud history of fighting for the city's working class, particularly our members and city councillors from Militant who led the victorious anti-Poll Tax movement of the late 80s and early 90s that brought down the Thatcher government.

In the past few years we have helped to secure Brighton's council homes for future generations against privatisation, campaigned to defend jobs and homes caused by the capitalist recession, fought against post office and nursery closures, supported working people taking action to defend their pay, pensions and conditions from attack, led protests against job losses, public service cuts and the privatisation and the dismantling of the NHS, and fought against academy plans to privatise the running of our schools. We have been key to the Brighton Stop the Cuts Coalition, and helped initiate and build the youth movement against fees and EMA cuts in Brighton at the end of 2010.
You can see a video we produced locally explaining some of our main ideas here: www.youtube.com/watch?v=sKTTxsjPBnA.
For information about our campaigns, our aims and our programme visit our national site by clicking the logo above or come along to one of our activities and get involved.
To get in touch:
EMAIL: info.bhsp@gmail.com
We receive a lot of views from people internationally. If you are interested in the work of the CWI in your country you can search this website: www.socialistworld.net
Listed below are the websites for the top 5 viewing countries of our website:
USA: www.socialistalternative.org
Russia: www.socialistworld.ru
Germany: www.sozialismus.info
France: www.gr-socialisme.org
Republic of Ireland: www.socialistparty.net

A Strategy to Defeat the Cuts

Socialism in the 21st Century

Women and the Struggle for Socialism

The Environment and Socialism